Skip to content
Submitted By: frank@wandascafe.com – Click to email about this post
We hope to see you at the theater and we’re proud to announce the 2023 lineup that we hope you’ll enjoy and support!

Rehearsals are underway for ‘Brighton Beach Memoirs’ with a March 18th opening and directed by Vicki Haker.

Auditions for ’12 Angry Jurors’, based on the Henry Fonda movie ’12 Angry Men’, will be held in early March. We’ll be looking for 13-14 men and women to fill the cast.

’12 Angry Jurors’ opens June 2nd and will be directed by Frank Squillo who previously directed ‘Arsenic and Old Lace’ and last month’s ‘It’s A Wonderful Life: The Radio Play’.

Following the success of ‘Dracula: The Radio Play’ last October we are proud to announce the debut of ‘Frankenstein: The Radio Play’ just in time for the 2023 Halloween season, opening on October 20th.

And we’ll round out the year giving It’s a Wonderful Life’ a rest after 5 years with a full-stage production of the holiday classic ‘A Christmas Story’, opening December 4th.

We’re very excited that we already have a Major Award Leg Lamp, a Legendary Official Red Ryder 200-shot Range Model Air Rifle, and a can of Simoniz being offered to us by Scott Fisher for our holiday production. And we promise we won’t shoot our eye out!

Thank you for all the community support in our record-breaking 2022 season and keep watching for more details about our 2023 lineup at www.RiverbendPlayers.org. 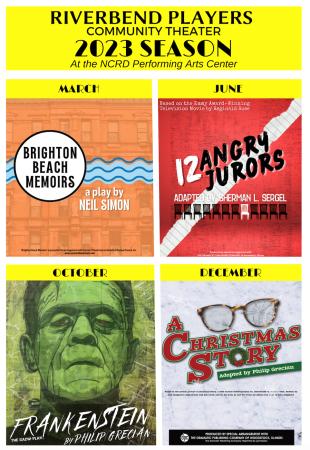