Skip to content
Submitted By: mayerleformanzanita@gmail.com – Click to email about this post
Continuing my ongoing process of building relationships with a network of experts, so far this week, I’ll be meeting with Manzanita’s Chief of Police Erik Harth, City Manager Leila Aman, and an additional member of the planning commission. I’ll also be attending the City Hall Project Town Hall.

This networking has proved to be more than fruitful—I’ve listened to a multitude of concerns and ideas and have gathered lots of facts. One that stands out is about System Development Charges (SDCs) and how they work, and their potential to create substantial revenue for the city.

SDCs are one-time charges that are assessed on new developments. In Manzanita, these are typically single-family homes. The charges pay for the cost of expanding public facilities, such as sewer, water, parks and streets. Growth creates additional infrastructure demands. SDCs provide a mechanism to support new growth in a community to pay for its share of infrastructure costs rather than relying on existing taxpayers or utility ratepayers.

The idea behind SDCs is that long-time residents have “paid their way” through property taxes, utility rates, and other means for the systems that are already in place. If those systems need to be expanded to accommodate growth, it is not paid for at the expense of the existing population.

Most cities increase their SDCs annually to account for inflation. One tool a city can use is the Engineering News Review Construction Cost Index, which factors in material and labor increases.

Here is when Manzanita last updated its SDCs:

Since 2015, more than 150 new single-family homes have been built in Manzanita, and the city has potentially lost more than a million dollars. Go back 15 to18 years, and that figure increases substantially. It continues to increase each and every month. These development fees are lost forever and can never be recovered.

As a result, more of these respective projects will now be borne by residents. In addition, because existing SDCs have not been annually adjusted for inflation, fewer actual dollars are being collected to pay for current and future projects. I believe existing residents and homeowners would have little opposition to the city imposing appropriate SDCs on new development to pay for infrastructure. I support updating our existing SDCs and exploring options to include street SDCs.

I’m Brad Mayerle, and I’m running for Manzanita City Council. Continue to follow me on the campaign trail to learn how I’m working to earn your vote, not just asking for it. Read my daily blog: www.mayerleformanzanita.com/read-my-daily-blog 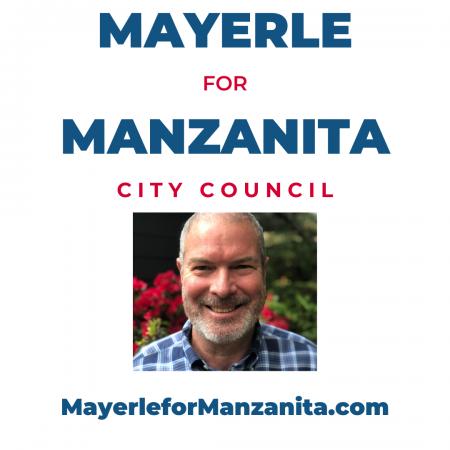