One of our neighbors, the owner of an oceanfront home who opposes view grading, received a letter from the Manzanita Neah-Kah-Nie Dunes Management Association–the DMA, from now on. She passed it on to me and I’m sharing it here with you.

Some backstory. In November of 2021, a group of 7 property owners had applied to grade the dunes between Horizon and Spindrift to improve their ocean views. Oregon Parks and Recreation Department held a public hearing on February 3, 2022, and in March 2022, OPRD denied the application.

The letter from DMA states that they have been preparing an amendment to the 1995 Manzanita Fore Dune Management Plan to be adopted by the City. The DMA wants to pay for their own set of planners and geologists so they can continue view grading by amending the City’s zoning ordinance. They will present this to the Council at the July 6 workshop at 3pm.

In part the letter from DMA reads: “We need your support to ensure the amendment is adopted by the City and we do not go the way of the City of Cannon Beach’s recent dune management plan update where they were denied the ability to maintain their ocean views. “This would severely impact the quality and value of our beach front homes…”

Exsqueeze me?! Oregon’s coast is public land. All of it. Including those inconvenient dunes. It doesn’t belong to private citizens or to any private entity for private benefit. However, the president of the association suggests that beachfront property owners have a special right to own the view because it adds value to their private property. Since they seem to believe they own the view, they also believe they should be able to maintain the dunes as they see fit.

It’s deeply troubling to me that the very entity writing this amendment and offering to pay for the process is not neutral and stands to gain financially from view grading.

The November application was to scrape 4+ acres of dunes (10,000 cubic square feet of sand) and spread it near the shoreline about 2 feet deep displacing or killing every living thing that depends on the dunes for habitat and also anything under the sand that would suffocate. After the dunes are gone, they’d replant the same invasive European Beach grass responsible for sand accretion, so they can lather, rinse, and repeat the process every few years, regardless.

The DMA letter brings up Cannon Beach’s recent update to its Fore Dune Management Plan. The reason view grading is no longer allowed in Cannon Beach is because the majority of its residents didn’t want more view grading. Simple as that. The minority of property owners who did want view grading lost the decision.

6. The plan must have the support of the majority of the community.
7. The plan is not to be used for the benefit of a few property owners or special interests, but for the city as a whole.

OPRD’s public hearing in February was a robust showing of opposition to what a handful of property owners wanted to do to public land for their profit. OPRD recognized that and denied the application in part because so many people turned out to oppose it, and in part because the Fore Dune Management Plan is too old and no longer reflects the current science behind climate change, sea level rise, and the kind of severe storms likely to increase in frequency.

Manipulating nature always comes with consequences. Too often when we mess around with natural systems and cycles, Nature bites us. Hard.

While the application mentions safety and access, Oregon law already allows for access grading for safety and habitat restoration grading for Snowy Plovers. But this is not that.

Those who received the letter from the DMA are asked to, “show the powers that be (The City, State Parks, Oregon Department of Land Conservation and Development) that the community supports dune management.”

But here’s the deal–the community DID show the “powers that be” that we support access, habitat restoration, and safety but we don’t support view grading for a handful of property owners.

What constitutes a beautiful view is a very subjective thing and also a changeable thing. The world offers itself to us every moment of our lives. Beauty, in a million different forms, is everywhere, if we have the eyes to see it.

To provide comment, email City Council and the City Manager before the workshop on Wednesday, July 6 at 3 pm and let them know what you think. 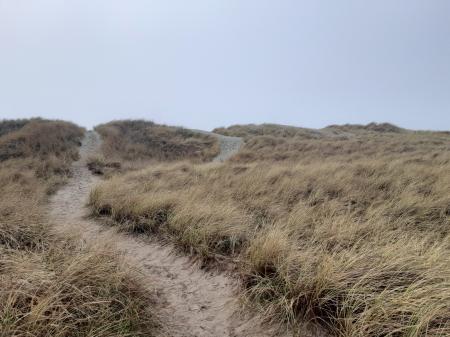