The Case of the Missing Marsh:
A Manzanita Mystery

When I heard from the City in January that .34 acres of wetland on the 3rd Street lot did not exist, I was confused. How did a little more than a third of an acre of land go missing? I thought wetlands were protected in Oregon. Forested marshy swamps are especially valuable to the environment and in great danger because they depend on developers for protection.

The forested land formerly called The Marsh by old timers was where elk wintered, songbirds lived and deer birthed their babies every spring. That land was like the rug in The Big Lebowski–it really tied the room together. Did it not?

Searching through the records, I found the Wetland Delineation Report that was filed with the Department of State Lands back in April 2021. It shows where the wetlands are located and how large they are. So, unlike the ice cream I thought was in the freezer, I didn’t dream this up. I asked a couple of people I know with expertise in land use to look over the report, too. They advised me to ask for the mitigation plan to understand how the water from the wetland would be managed. Sometimes there’s an engineering solution or a site plan change to incorporate wetlands into a development’s landscape.

If you walked down 3rd Street this winter and watched the giant houses at Whispering Pines going up, you saw water standing a foot deep on the concrete foundations. On the south end of the lot between Merton and Edmund you’ve watched as existing trees and brush were bulldozed, No Trespassing signs put up and trenches filled with water even when it wasn’t raining.

We’d just experienced the latest atmospheric river events. Many of our neighbors on the north side of Edmund adjoining the 3rd Street lot had flooded yards, and many houses on both sides of the street had standing water underneath. The water table on the lot is super high already (thus, The Marsh) and water has to go somewhere. We were worried.

The City doesn’t issue, maintain or review Wetland Mitigation Plans and I learned that what is happening on the lot isn’t called grading; it’s called surface preparation for fill. Good to know because there is plenty of fill on its way.

I contacted DSL for the mitigation plan and learned that instead of the other options available, the developer simply bought his way out of those messy wetlands by purchasing $102,000 in credits in the mitigation bank. This is why small, forested marshes like 3rd Street are in trouble. They are small. They are on land that can be developed. It doesn’t “pencil out” for developers intent on making as much cash as possible to think of preserving trees or wetlands or wildlife or existing neighborhoods.

When you have a lot of money you can make things like wetlands and dunes disappear. You can poop in one place and flush in another.

I think we actually do know what a pocket-neighborhood is and why we didn’t want it then and don’t want it now.

In the current proposal for the Heron’s Rest pocket-neighborhood, the land will be raised higher with fill–yes, raised–to afford the 26 two-story houses an ocean view while dwarfing the existing homes and businesses surrounding them. Much of Neahkahnie will be blocked from view in the south part of town by these two story houses. Facing 3rd Street a “residents only” 29-space parking lot with an additional 12-space lot on Hallie also for residents of the development only. I think together that’s bigger than the IGA’s lot.

Contrary to what some people think, no workforce housing is included in the proposal.

And those big Whispering Pines houses going in behind Wild? First off, there are no trees left there to whisper and likely to be none that can thrive in the space left on those lots. The houses are zoned R4 and can immediately be used as vacation rentals.

The proposal for Heron’s Rest hasn’t gone to the Planning Commission yet but when it does there will be a public hearing like the one coming up about awnings and variances for the winery tomorrow, February 22 at 4pm.

If you don’t like the way things are looking in our town, read what’s on the Planning Commission’s agenda, read the Ordinances involved, read the Comprehensive Plan. She may be old but she is still the primary land use document acknowledged by the State of Oregon. Write emails and letters to the City Council and the Planning Commission, show up at the meetings, be part of the decision making process.

Whose town? Our town! 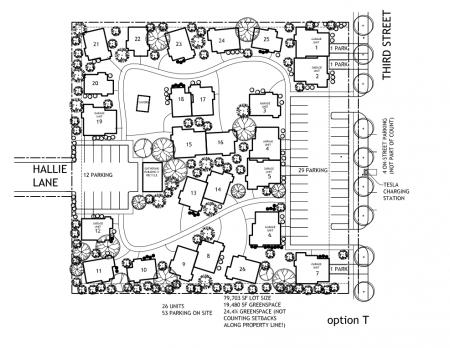