Skip to content
Submitted By: nmccarthy1276@gmail.com – Click to email about this post
The Cannon Beach Library will host suspense writer and former American Embassy diplomat Stephen Holgate at 2 p.m. Saturday, Feb. 5 on a Facebook Live presentation.
Viewers can join from the library’s Facebook page or from the library’s website, cannonbeachlibrary.org.
Holgate will discuss his latest book, “To Live and Die in the Floating World,” a thriller set on a tourist boat on the canals of Burgundy. The boat is similar to the one Holgate once worked on as a crew member. How his own experience compares with that of his fictional characters may be answered in his discussion.
His previous suspense/thrillers, “Tangier” and “Madagascar” and “Sri Lanka,” are based on the characters, conversations and experiences he encountered in those locations while he worked in the diplomatic service.
He served as a diplomat for American embassies in France, Madagascar, Morocco, Mexico and Sri Lanka.
In addition to his foreign service posts, Holgate spent several years as a congressional staffer; headed a committee staff of the Oregon State Senate; managed two electoral campaigns; acted with the national tour of an improvisational theater group.
“Tangier,” his first novel, gained critical acclaim, and made the Bookreaders 10-best list in the indie mystery/suspense category.
His second novel, “Madagascar,” received a starred review from Publishers Weekly, a nomination from Forward Reviews as best book of the year in the fiction category, and another listing from Bookreaders as among the 10 best mystery/suspense novels of the year.
In addition to his novels, Holgate has published several short stories, produced a one-man play and written freelance articles.
He lives with his wife, Felicia, in Portland. 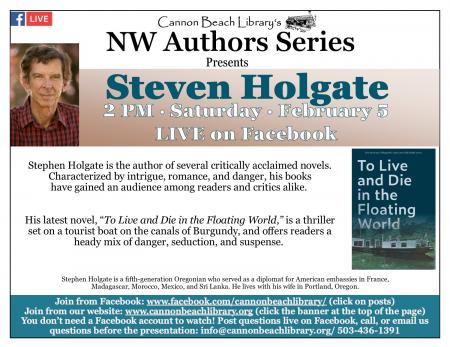