Skip to content
Submitted By: ben.killen.rosenberg@gmail.com – Click to email about this post
Posting on behalf of Kim Rosenberg loretta.kim.rosenberg@gmail.com
Public Hearing
Tomorrow evening, Thursday February 3 at 6pm the public hearing for view grading between Spindrift and Horizon will be held. It''s not too late to sign up to attend.
A moratorium on view grading was in effect from 1997 until this fall when the City Council of Manzanita allowed it to lapse. Goal 18: Beaches and Dunes in Oregon''s Statewide Planning Goals reads as follows:
“The goal specifies detailed requirements for foredune grading (lowering of the dunes for views). Such grading is permitted in limited circumstances in association with existing development. It must be based on a specific dune system management plan that prescribes standards for maintaining flood protection, maintaining overall system sand supply, and post-grading sand stabilization (e.g. planting of beach grass).”
I''m not a scientist but I know that the research about climate change, sea level rise and our collective impact on the environment has changed since 1997. We can measure the rising water. We can count the cost of storms and floods and fires and drought in lost livelihoods, lost homes and lost lives. Pretending like the physical nature of the world hasn''t changed since 1997 is like turning your back on a sneaker wave and hoping you don''t get wet.
This all makes me weary. Not just the view grading application on the edge of town but the generalized destruction of a place I love. On the north end of the 3rd Street lot big box buildings are rising out of the mud like modern day Gollum’s.
On the south side a proposed development of 26 two-story homes built on raised land to afford ocean views will block the sight of all but the top of Neahkahnie from the Lanes and permanently change the character of town, if it''s approved.
And I''m told by people in charge that that''s just the way it is. Just move on or go back to sleep, I''m told.
It doesn''t have to be this way. We can make different choices. We can put humans in positions of power who are interested in protection of our shared resources and true sustainability. We can be thoughtful and steady about growth. We can say a loud no to what doesn''t serve the community as a whole but favors a few. We can use our melons to think up new solutions.
Or we can close our eyes and go back to sleep.
I''ve been revisiting William Stafford''s poetry and came across this in A Ritual To Read To Each other. He writes:
For it is important that awake people be awake, or a breaking line may discourage them back to sleep; the signals we give — yes or no, or maybe — should be clear: the darkness around us is deep.
Kim Rosenberg loretta.kim.rosenberg@gmail.com 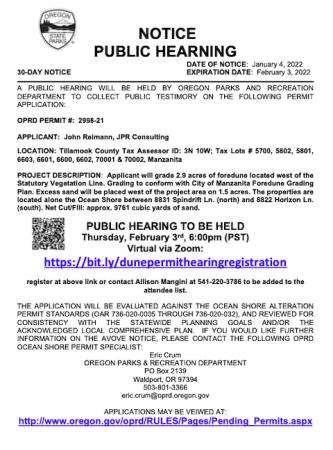